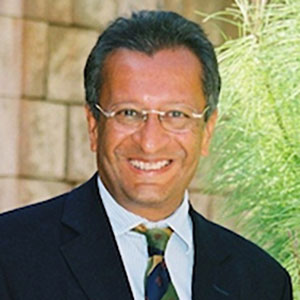 Mohamed Amersi is a world-renowned entrepreneur and philanthropist. He is a committed leader and innovator who has driven the successful foundation and growth of numerous business and non-profit ventures. With Mohamed’s guidance, companies and charities of all sizes have enriched their output, honed their services, articulated their purpose, and delivered long lasting significance.

Mohamed is an esteemed and distinguished philanthropist. He is known for leveraging his personal connections and professional network to effectively promote the pressing and emerging issues in the world today. He uses his considerable commercial, political, and charitable proficiency to lead organizations on numerous levels. With a focus on value-driven action, Mohamed strives to ensure strategic growth and beneficial collaboration between all sectors.

He is the founder and Chairman of The Amersi Foundation where he advances issues of global import: access to opportunity, diversity, tolerance, and prosperity. In line with his vision for a world of prospects and potential, Mohamed sits on the Advisory Board of the Oxford Foundry where he strives to form a new cadre of ethical leaders and moral change-agents.  As a Member of the Board of the Governing Council and Audit Committee of the Royal Agricultural University, Mohamed steers the institution toward ongoing educational excellence, sustainability, and ecological innovation. At the University of Oxford, Mohamed is a member of the Chancellor’s Court of Benefactors.

Throughout his globe-spanning career, Mohamed has proven his skill and expertise in many spheres. He has worked in the financial/business sector, government agencies, international policy systems, and charitable leadership. His unmatched experience and steadfast devotion shape his refined approach to politically and culturally challenging situations. He consistently provides informative answers, sensitive resolutions, and growth-spurring results. Mohamed was appointed by HRH The Prince of Wales as the leader of the board of advisers crafting, designing, and implementing international programs to increase and spread equality and justice across South East Asia.

In the telecommunication industry, Mohamed has had founding and executive roles in several high-profile companies. He has directed and advised key firms on mergers and acquisitions, structural and administrative growth, risk, and intergovernmental communications. He has lead worldwide operations and advanced strategies for responsible investment which align profits with social and environmental impact across multiple interests and geographic areas including Africa, the Middle-East, and Asia. He is the Founder of the Inclusive Venture Group and the Founder and CEO of Emergent Telecom Ventures.

He is a Founder of the Global Civic Forum which forms a community of worldwide civic leadership and attempts to counter extreme nationalism through international endeavors, alliance building, and shared values. He is also Chairman and a Trustee of the Islamic Reporting Initiative, Member of the Board of CoJit (Combating Jihadist Terrorism & Extremism), and Member of the Board and Advisory Board of the Commonwealth Enterprise and Investment Council.

He was made an Honorary Fellow of Brasenose College in 2016. Mohamed also has an Executive MBA from The Saïd Business School of Oxford University, as well as a Law degree from Sheffield and Cambridge.

For more on Mohamed Amersi: